In 1988 Honourable Don Mazankowski was Deputy Prime Minister in the Mulroney Government. Minister Mazankowski brought to the attention of Iris Evans, Reeve of Strathcona County, that the Edmonton International Airport, owned by the Federal Government, was to be shut down in 90 days. The Municipal Airport in Edmonton was to be our main airport.

Iris jumped into action, calling up Vern Hartwell, President of the Sherwood Park & District Chamber of Commerce, to request his help to rally the business community to the cause. Iris recognized that our Chamber of Commerce is a driving force in fighting for business at a local level, and not losing business to other cities. According to Vern, the Federal Government wanted to have only one major international airport per province, which would be the Calgary International Airport here in Alberta. 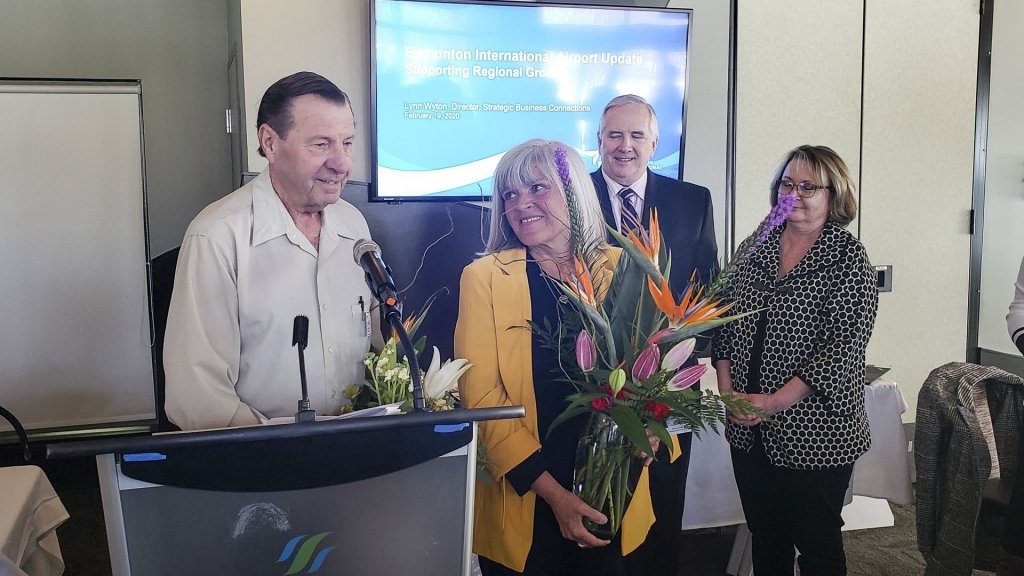 Past Chamber President Vern Hartwell and the Honourable Iris Evans

This lead to the creation of the Edmonton Regional Airports Authority (ERAA), the first regional airport authority in the country. The goals of the ERAA are to:

The ERAA is a community-based, financially independent, non-share corporation responsible for operating and developing two airports in the best interests of the surrounding municipalities: Edmonton International Airport and Villeneuve Airport. The board of directors is, in part, appointed by several municipalities. As of today, five board members are selected by the City of Edmonton, two by the Government of Canada. The City of Leduc, Parkland County, Sturgeon County, and Strathcona County also get to appoint one board member each.

During their four-year term, directors must represent what they view as the best interests of the Airports Authority and the region. Strathcona County’s current appointed Board Member is Jay Ramotar, M.ENG, P.ENG. Mr. Ramotar retired as Deputy Minister for Service Alberta in 2013 following a distinguished 37-year career with the Government of Alberta. During his tenure, he also held senior positions as Deputy Minister for the Departments of Solicitor General and Public Security, Health and Wellness, Treasury Board, Infrastructure, and Transportation.

Under Evans and Hartwell’s leadership, and the strength of our municipalities working together, Strathcona County was able to ensure a strong voice at the table concerning future economic development and the airport in the region, through the Edmonton Regional Airport Authority.

The Sherwood Park & District Chamber of Commerce recognized the contributions of Evans and Hartwell at the February Luncheon & General Meeting in 2020 at the Broadmoor Public Golf Course. They were presented with flower arrangments, featuring Bird of Paradise, symbolizing the freedom and joy their efforts have brought to Strathcona County and the surrounding municipalities, created by Chamber member Shig’s Flowers. Hartwell was proud to receive the acknowledgement, saying he was following Iris’ strong leadership. Evans was surprised and touched by the recognition, joking that you never know what to expect from current Chamber President Cathy Olesen and Executive Director Todd Banks.